The Number One Pizza Topping…Again!

Spinach and feta with roasted tomatoes may be trendy.

But when it comes down to it, Americans stick to their tried and true favorite: Pepperoni remains the hands down most popular pizza topping … again! Let’s face it; pepperoni pizza is as American as apple pie.

Approximately 251,770,000 lbs of pepperoni are consumed on pizzas annually. That means that more than 35 percent of the three billion pizzas sold had pepperoni on them.  According to Zagat Survey, which polls people on such things Americans eat, on average, pepperoni pizza pies at least once a week. 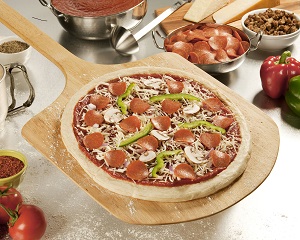 That’s a lot of pepperoni and, if anything, illustrates how traditional consumers really are when faced with the inevitable question, “So, whaddya want on your pizza?”

A poll in a recent Huffington Post article discovered the same thing about our taste for pepperoni:

What pizza topping do you order most frequently?

Why is pepperoni so popular? It is simply the best topping on a pizza.  Even at a time when there’s all this hype around alternative toppings and so many chefs are having fun creating crazy pizzas, consumers are always drawn back to pepperoni.

Pepperoni pizza is just one of those pure indulgences we gotta have.

First, it’s the taste.  There is simply nothing like adding zesty, smoky pepperoni to your pizza. It’s like bacon and eggs, spaghetti and meatballs, peanut butter and jelly.  Another reason people love it is the little bit of spice.  Consumers prefer spicy foods and pepperoni adds just the right amount to, well, spice up a cheese pizza. Blended with creamy mozzarella, it is the perfect combo.

What’s more, pepperoni goes great with every other topping including the traditional ones like onions, peppers, garlic, olives and mushrooms and the more obscure and adventurous ones like artichokes, spinach … even a fried egg!

It may be fun to try new things on your pizza but when it comes down to it, there is simply nothing like pepperoni to top off your pizza.