Slices for a Sweet Tooth

One of the reasons why pizza is America’s no. 1 comfort food is the sheer variety available – it’s the ultimate personalization food as the various toppings offer multiple choices starting with spicy pepperoni, crispy ham, juicy pineapple, and even… marshmallows? Yes, even marshmallows.

Dessert pizzas have risen in popularity in recent years, garnering quite the following on many pizzeria social media pages. Social media allows chefs to get creative and play around with recipes that stray far from traditional pizza pies. Online platforms offer them a fertile testing ground where people can like and comment on a newfound recipe. The chefs are then empowered to create the new pizza with the knowledge that customers are willing to purchase their creation.

Dessert pizzas are not very difficult to whip up. Websites like Pinterest have dozens of creative options with step-by-step recipes. Pizzerias across the country are also integrating them within regular menus. New York City is a mecca for pizza, and it is no different for dessert pizzas. One of the most popular spots to grab a sugary slice is Tony’s Pizzeria and Restaurant which sells a Nutella, strawberries, and marshmallow creation. Paulie Gee’s in Brooklyn has two dessert pizzas available on the menu, one of which is popular on social media: the “Apple Cider Caramel”. 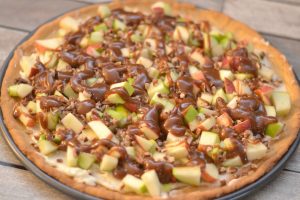 Dessert pizzas have the same elements as traditional savory pizza; first, pizza dough is still used as a base, but chefs can use whatever doughy alternative they desire. The sauces can vary but still have a smooth and creamy texture. The toppings though have a sweeter kick than regular slices. Some of the more popular ideas include:

A concoction of all that is sweet, dessert pizzas are amazing because although there are recipes that one can follow, pizzaiolo’s often create their own interpretations. Next time you’re at a pizzeria and you see options for dessert pizza, take the leap and try it out.