Just when you thought there was absolutely nothing new to do with a French fry – along come Pepperoni Pizza Fries.

Behind them: The we’ll-try-just-about-anything fast-food chain Carl’s Jr., which has just begun testing them in about a dozen of its restaurants in Southern California – mostly in the Anaheim area.

“It may look like a mess — but it’s messy good,” says Brad Haley, chief marketing officer at Carl’s. Customers have compared the taste, he says, to pizza with a French fry crust.

The ingredients: Fries (natural cut with the skin on), pepperoni, pizza sauce and mozzarella cheese. The price: $2.39.

Behind the test: loaded fries are emerging as a national trend. New makers and sellers of gourmet fries seem to pop up almost daily – and even high-brow publications like Conde Nast Traveler are starting to take note in articles that highlight the newcomers. Even the major burger chains, including McDonald’s and Burger King, have tweaked their fries in recent years. Burger King experimented with lower-calorie Satisfries and McDonald’s has recently tested “Shakin’ Flavor Seasonings” with its fries and McNuggets. 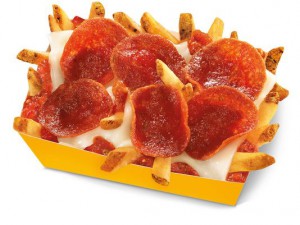 Not that Carl’s hasn’t tried. It’s experimented with Gravy Fries, Chili Cheese Fries, Bacon Cheddar Fries and Bacon Ranch fries. “It’s not new to us to do this kind of thing,” Haley says. The chain, after all, is mostly targeting young, hungry men 18 to 34, who come from a generation of flavor mash-up lovers. The major food blogs relentlessly report on the latest flavor mash-ups.

“Younger generations – especially young men – like to try new food experiences, because it gives them a story to share with their friends,” Oches says.

But this should not be mistaken as Carl’s Jr. maneuvering for any sort of toehold in the pizza world, Haley says. The chain is focused on indulgent burgers, he says. “Pizza is not part of our brand character – but pizza fries go great with burgers.”