I’m Dreaming of a White Pizza

With the holiday season in full gear, the typical meals of turkey, ham, mashed potatoes, and all the fixings are making the rounds. Pizza is not often thought of as an alternative to traditionally festive meals, but it certainly can be, with a slight twist.

There are a few basic components that come to mind when making pizza: dough, sauce, cheese, and toppings. While everyone has their personal preferences for dough, cheese, and toppings, marinara sauce is the usual base for most pies. Not many folks attempt to tackle the delicious, but tricky white sauce pizza.

White sauce pizzas are usually less likely to be ordered in a restaurant, but not any less satisfying than their red sauce counterparts. A truly decadent white sauce is crafted with cheeses such as ricotta and mozzarella. It is then slathered generously onto the dough, but it is crucial not to use too much or too little.

White pizza can be very difficult to pull off, as it usually comes off being too heavy and thick or too light and 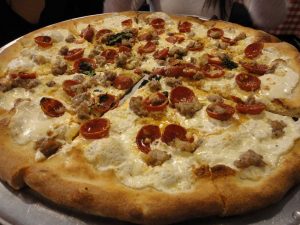 flavorless. Discovering a happy medium between the two is the first step in creating a perfect holiday treat, with some white pizzas leaning one way or the other based on personal taste.

Toppings come next, and there is a multitude of combinations to complete a white pizza. Garlic and pesto are often used as simple, omnipresent toppings on both lighter and heavier white pizzas. Greens such as basil, rosemary, and spinach are great complements no matter what. For those who want to stick to a lighter white sauce pizza, chicken is a fitting meat to use, as well as optional sun dried or regular tomatoes, red onions, Parmesan cheese sprinkled on top followed by lightly drizzled olive oil. The crust is also typically baked thin.

For an individual who wants to go a bit more on the heavy side, artichokes can propel the pizza into a creamier heaven. Meat wise, ham is an excellent topping as well as a salami, prosciutto, bacon, and pepperoni. Mushrooms, caramelized onions, and even an egg can be used. Burrata and other heavier cheeses can be added on, usually to thick dough.

These varieties of toppings come together to create a flavorful, perfectly crafted pie. Despite the delicious options to take with white pizza, some people will still be skeptical.

White sauce pizza will always be compared to traditional tomato sauce pizza because of its lack of a major pizza ingredient. However, when done well, white sauce pizzas can satisfy anyone. This holiday season, you can dream of a white pizza by taking your comfort food cravings to the next level and cozying up to the fire with a fresh, warm slice.