One of the fun things about going to baseball games is eating the food.  There’s nothing like a ballpark hot dog, greasy fries or nachos, and the old favorites: peanuts and Cracker Jacks®.

Unfortunately, the pizza at the park is generally a strike out; with a slice in a box that seems to contain a reheated pizza, not even made on the premises. The vendors often are handing out pies that are jostled, cold and oily, not the most appetizing way to serve our favorite menu item. 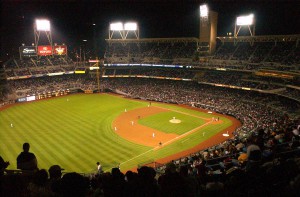 In recent years, baseball teams have jumped on the gourmet bandwagon, upgrading the food quality with offerings from local restaurants. More regional and national pizza chains appear in ballparks across the country, and you can even find fruit stands and health food booths at some stadiums.

Pizza and pizza promotions have actually been standard fare at ballgames for many years. Domino’s Pizza® has a sport-wide MLB promo called the “Domi-nono” in which those with MLB.com accounts can receive a promotional code for a Handmade Pan Pizza when the fourth no-hitter of the season is thrown. The pizza chain had a problem with their promotion last year when it offered to give away 20,000 pizzas after the first and second no-hitters of the season. Their website was inundated with inquiries they could not fill.  However, the “Domi-nono” will resume for the 2015 season.

When spring comes and the first ball of the season is tossed out, pizza operations around the country look for ways to promote themselves to Little League, high school baseball teams and other baseball activities in their community.

On the minor league level, Sbarro® delivers a pizza to the loudest fan at the Schaumburg (IL) Boomers games.  Such outlandish promos are not unusual at minor league games, which are more exciting and creative when it comes to entertaining fans.

But pizza promotions can be costly. In 2013, LaRosa’s Pizza in Cincinnati offer Reds ticket holders’ free pizzas whenever a pitcher struck out more than 11 players in a game. By the end of the season, there were 14 such occurrences and LaRosa’s gave away more than $100,000 worth of pies.

And, of course, we know that every pizza place with a TV will be tuned into games in order to attract fans in their community.  Giving stuff away is an extra-added bonus.  If you do promote your community’s team, be sure to promote it on your app, your website and through social media.