Unlocking the Mysteries of Cured vs. Uncured Meat

To cure or not to cure? That is the question.

While it really isn’t quite that dramatic, the idea of curing meat is curious especially as people become more informed about their food choices.

For some, the difference involves a health issue.  Some people believe uncured meats are more healthful. But that is truly a matter of debate because there is no discernible scientific evidence to prove that cured meats are unhealthy.

The biggest difference between cured and uncured is the fact that the uncured uses natural curing agents, such as celery powder, which transforms into nitrite when it is processed.  Thus, uncured products have labels with: “No Nitrates or Nitrites added except those naturally in celery powder or juice”.  So whether it is a manufactured version that is commonly used or the natural version (celery powder, etc.) the color formation and stability come from this source.

The rise in popularity of uncured meats may have more to do with marketing and perception than fact.  Just the word, “uncured” infers the idea of not being treated – as if being “cured” infuses something unwanted and perhaps harmful into your meats.

More and more, you can find both uncured and cured bacon and other meat products.  Do you know which one to choose?  Does it matter?  It certainly wasn’t always that way. 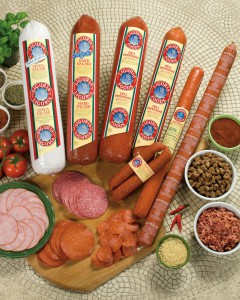 You might remember from those Old West movies that pioneers salted their meat and buried it to consume at a later date.  Without refrigeration, there wasn’t a way to store food and stock up for hard times.  Actually, curing meat and fish goes back to the third century BC when the Greeks used sesame oil to cure hams. Later, the Greeks created salt gardens and used their “crop” for dry salt curing.  It was at this time, that they also began smoking their meats, which is another form of preservation.

In the Middle Ages, people treated meat with salt, saltpeter and smoke.  In the 1800’s, the curing process evolved significantly with the discovery of the benefits of nitrates and nitrites to prevent spoilage and enhance the flavor and texture of the meat.

You can usually tell whether a meat is cured by its texture, color and smell. Why is a ham’s texture different from a pork roast even when the two cuts come from the same animal?  When you salt the meat, it leaves muscle fibers slightly denser as the proteins contract.

Also, uncured meats are more pale than cured meats.  Consider the difference between a dark red roast beef and an uncured piece of pork. Curing also creates complex flavors created by yeast, enzymes and favorable bacteria during the process.

Quite simply, it’s all a matter of how the meats are preserved:  Cured meats use chemicals and additives while uncured meats rely on natural salts and flavorings.  Cured meats have nitrates.  Uncured don’t. Both methods are used to preserve meat.

Foodservice operators may want to offer both types of meat as a way to provide options for their customers, especially those who believe the uncured varieties are cleaner or less harmful.

Many people are allergic to nitrates and nitrites so they would opt for the uncured meat or fish.

Some meat companies, such as Liguria Foods, cure their meats with celery juice or powder because celery contains natural nitrites.  This is a bonus for the healthy eater. Because nitrites are not added, the meats are considered by the USDA to be uncured.

Whether you choose cured or uncured, unless meat is sold raw, you should know that it must be preserved so that it does not spoil.