Pokémon Go is one of a kind when it comes to interactive games because while it is a game played on a phone, the player needs to walk around to actual locations in the real world in order to progress in levels and capture the little creatures called Pokémon.

Pokéstops are places like restaurants, monuments, and tourist spots that give players extra items when they are close by. Pizzerias that are in strip malls or busy shopping areas have a high potential to be near a Pokéstop and therefore, pizzeria owners can use that position to further entice customers to come in and stick around – most likely purchasing pizza during their hunt.

Venezia’s Pizza is utilizing a combination of both Twitter and Pokémon Go to attract customers by having them tweet pictures of catching Pokémon at the restaurant. With five locations in the Phoenix area, Venezia’s is offering the chance to win free slices of pizza, which is a very effective model as they do not have to guarantee everyone who participates a free slice. Plenty of people participate regardless because it is very simple to screenshot a picture from the game and tweet it to Venezia’s Twitter page. This generates responses from those on Twitter who do not even play the game, but may have seen their friend tweet Venezia’s. 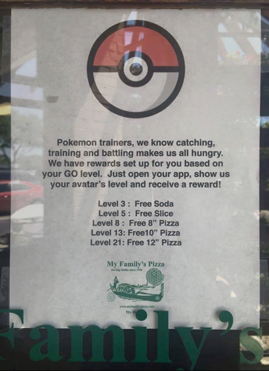 My Family’s Pizza in Dallas was one of the first restaurants to sweep the internet with specials relating to the game. Because they started when Pokémon Go launched, they based their specials on what was applicable at the time. After a few weeks, they might want to change it as offering a free eight-inch pizza for a level 8 in the game is extremely generous as many players have already surpassed that level. 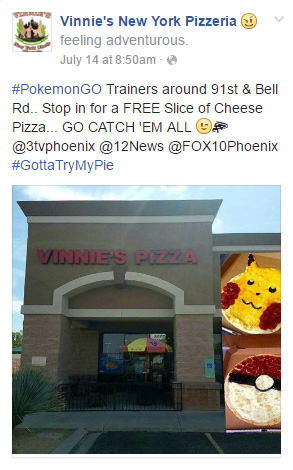 Vinnie’s Pizzeria in Peoria, AZ, is another restaurant that has taken advantage of the recent trend. Not only have they held a promotion day where they offered a free slice of pizza for users of the game, but they have been creating pizza in the shape of Pikachu, a popular Pokémon in the game, and a Pokéball, the device used to catch the little creatures.

Whether you are a player of the game or not, there is something to be said about crazes that dominate the masses. Pizzerias that take advantage of fads and trends to creatively attract customers go a long way to expanding their brand and increasing sales. The Pokémon Go phenomenon is ideal for pizzerias because in order to progress in the game, players have to spend a lot of time walking around their neighborhoods. We all know there is nothing like a delicious slice of pepperoni pizza to provide the fuel to continue on their mission to capture more Pokémon.