Breakfast is something that dieticians are always telling us not to skip.

But that doesn’t mean it has to be boring or bland or repetitive.

That’s right, our favorite lunch, dinner, sports, family, feast and festival food.  We eat at all other times so why not with our morning cup of Joe.

Your restaurant should consider it too. You probably have many new and trendy ideas on your menu as it is including gluten-free and vegan pizzas and those with exotic spices, vegetables and meats.  Many of you already feature a pizza with a fried egg on top and bacon has become a standard topping. The foodservice industry has glommed on to breakfast like mozzarella on steaming hot pizza pie. 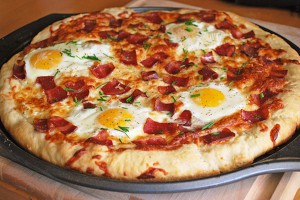 Next stop for breakfast will be your place. Not every pizzeria has the ability to serve a morning meal but since our customers have shown their love for it, it should be a consideration.

To do so, survey your customers to see how they would feel about you opening for morning hours. If you do it, create a promotion to drive business then be sure to get out the word through your social media platforms as well as in-store signage. Perhaps create a button your servers could wear like, “Got Breakfast?” which would open the discussion.

The menu options, while not limitless, are intriguing. Breakfast calzones.  Eggs and Bacon Pizza. Sweet Pineapple and Bacon pizza. Pizza bites and rolls. You could even serve a traditional eggs and bacon, sausage or pepperoni breakfast with slices of cheese pizza on the side.

Breakfast allows you to break down some barriers and use your imagination. Your customers will appreciate the effort and so might your pocketbook.

As you search for ways to increase sales and beat your competition, now is the time to explore Breakfast, the next great frontier.