Dried Salami: From the Streets of San Francisco

Over a century ago, when the Golden Gate Bridge was just a twinkle in an architect’s eye and the fog was constant and dense, something new, different and ever-so spicy was concocted in the back rooms of San Francisco Italian grocery stores.

Somewhere between the late 1800s and early 1900s, scores of Italian immigrants poured into the Bay Area in search of newfound success and stability and carrying with them a knack for making salami.

Schooled in the fine art of salami-making, these charcuterie experts brought their craft to the rolling hills by the Bay and introduced America to fine, dry salami.  According to legend (and Wikipedia), the first San Francisco salami makers were hawking their hand-cured salamis through the doors of small markets in North Beach as early as 1884.

Walking down those unpaved streets, you could not escape the sight or smell of long tubes of cured and cased meat hanging in the windows of genuine Italian grocery stores.

The cool climate of San Francisco offered the perfect atmosphere for natural air-drying salami.  It might have taken weeks, but the resulting products were worth it and the demand was huge. Each salami-maker reflected his Italian origins and thus we have a wide variety of flavors and styles including Felino, Finnochiona, Napoletano, Sopressata and Cacciatora among others. 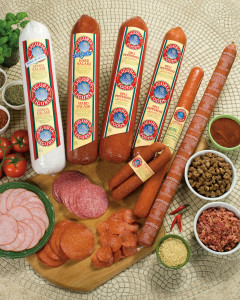 So adamant are the San Francisco descendants about their particular dry salami, that from 1967 to 1970, the waged a war on the U.S. Department of Agriculture for the right to the name: “Italian salami.”  They stressed their history of salami-making back to the 5th Century.  They pleaded that that adhered to strict rules regarding types of chopped (never pureed) pork shoulder meat that had to take time to make.  In the end, the USDA sided with the salami makers so that any time it says “Italian Dry Salami” on a chub, it is guaranteed to meet high standards.

Today, mass-produced salamis are processed in climate-controlled drip and drying rooms, but the romance, the flavor and the tradition remain. You can still find old-time Italian groceries and deli’s around the Bay Area, but many source their meats from top-line meat producers rather than dry-curing themselves.

Through a time-worn process, today’s salami makers, like Liguria Foods, have honed their versions of dry salami into one of the most popular sandwich items in the world.  Most often, high quality pork is blended with a customized recipe of spices and then cured over time in temperature-controlled rooms.

The method of dry-curing is painstaking and long but well worth the resulting magical transformation that allows the salts, temperature and humidity to unearth the wholly unique flavor.

In an age of improvised charcuterie, there are dozens of styles of dry salami, some mild and some spicy, on the market. All are modeled after the original salamis found hanging in those early San Francisco shops.